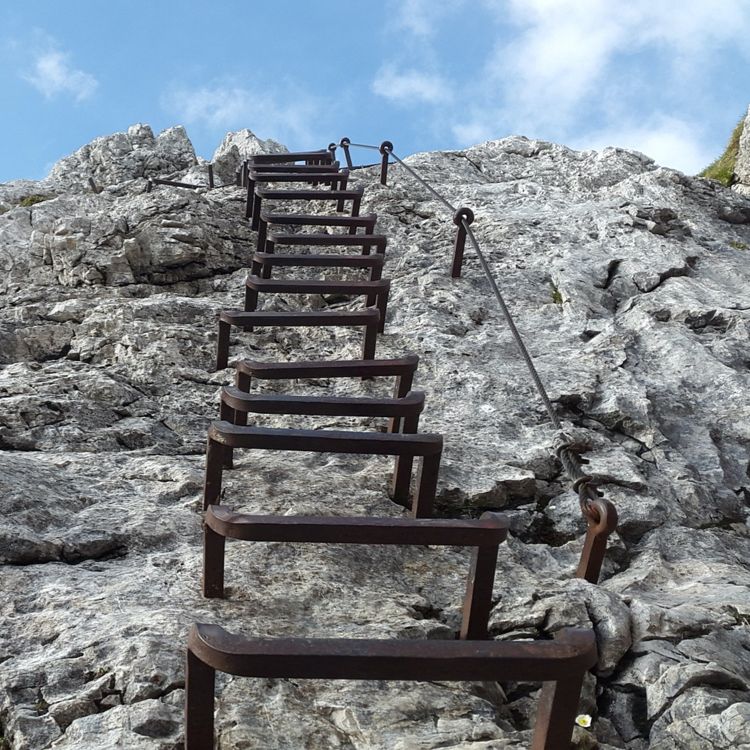 Anna spent some time on our local climbing tower in Boone, NC last summer. She really enjoyed her first impressions handling a climbing harness, clicking carabiners and the safety of a climbing rope. Before we flew to Germany to visit Oma and Opa I asked her if we should bring harness and carabiners with a short rope and do some climbing on real and rugged mountains.

She was so excited about the idea that we had to go to our local climbing outfitter to buy some climbing shoes for her. She found perfect ones, some in her favorite color, with a specially designed rubber sole for hiking and climbing, and they even were on sale.

Five days after our arrival in Bavaria just getting out of the jet-lagged phase we decided to drive early to Garmisch-Partenkirchen to get one of the first cable cars to the Osterfelder Kopf, the trailhead for the Alpspitze Ferrata and other climbing routes through the north face of the Alpspitze.

See my ice climbing along the Blue Ridge Parkway

Here is the start for the 1900 vertical ft climb on “iron ladders” through the N-face of the Alpspitze. This mountain is a beautifully shaped pyramid high above the town of Garmisch-Partenkirchen and visible already from a long-distance away. The climb we are doing together is a with fixed steel ropes secured, and iron ladders leading over steep rock slabs equipped trail (Via Ferrata). Anna was wearing her harness and two short ropes of about 5 feet length with a wide-mouthed carabiner to click into the steel rope to belay herself.

It took just a little supervision for me at the first 100 yards and after that, she did an excellent job to belay herself on exposed climbing sections. I was amazed to see how a 10-year-old is becoming so responsible for the safety and protecting her life form accidents. Quickly she began to decide whether she clicks onto the steel cable or not for a more efficient and faster-climbing pace. She always checked with me if she is doing the right thing.

The climb is long and strenuous for her and maybe halfway up she got to a point of tiredness. I was putting her in charge of an important decision: (I) to turn around here and climb down the way we came up, or (II) to continue to the peak and have a long descent back on the other side in endless scree and another simple hike at the bottom of the N-Face, the Nordwandsteig. She looked around and was stoked by the stunning views around here and the vertical rock faces.

She also looked up towards the clouds and spotted the Alpspitze peak above us. Her decision came over like that: “Dad, I’m a bit tired and I like to go home, but I like to climb that peak as well and be next to the big cross on top – let’s continue to climb up”. — That was a real overwhelming decision coming from a 10-year-old girl on her first climbing trip. On the remaining 900 vertical feet, she didn’t show any sign of tiredness and when she saw the tall cross was only about 100 yards from us, she started a final sprint.

After reaching the highest point we hugged and shook hands like old mountaineering buddies. I showed and explained to her the purpose of the register which is stored in an aluminum box fastened to the cross. She proudly wrote her name into the “guest book” how she called it. With 2629m or 8625 ft and approximately 2000m / 6000 ft above the valley of Garmisch-Partenkirchen that was her tallest mountain she climbed and too bad, the weather was not cooperating.

We had to eat our snack in the fog and the light gray took the incredible views, you usually enjoy up here, from us. After one hour sitting up here, we have begun with the long descent through endless scree and short steep climbs over some 6 – 10 feet tall rocky steps. Now I could see how tired her legs are and sometimes I preferred to take her on the sort rope. Anna was very careful when placing her foot for the next step on the loose rock and did not complain at all about the tiring walk.

Her face and the grinning reflected the happiness about her successful climb of that huge and beautiful mountain. There was one more 90-foot tall ladder to descent until we reached the mainly horizontal running “Nordwandsteig”. This trail traverses the entire N-face of the Alpspitze and leads us back to the Osterfelder Kopf and the cable car station. The less than an hour walk offers some really exposed sections where your “behind” is hanging in the air for some 300 feet above the ground, a 300 feet and absolute dark tunnel and a couple of short ladders.

At about 4:30 PM we returned safe and sound to the point where we started our climb 6 hours ago. Anna was now focused only to sit down on a barstool at the open-air bar at the restaurant’s large deck. “Dad, I need a large Fanta now” – we quenched our thirst and had a piece of fine Swiss Chocolate. At 5 O’clock the last tram took us down to our parked car. On this 10 minute ride, we enjoyed the beautiful views towards the town of Garmisch-Partenkirchen and surrounding mountains.