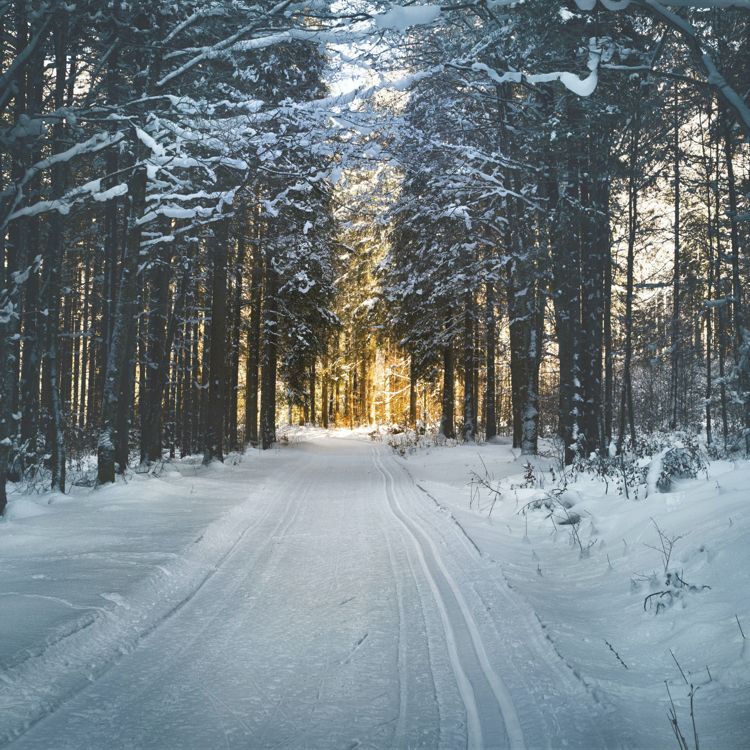 It has been cold for an entire December week now. Temperatures stayed below 32°F and a monster ice storm with 24 hours of freezing rain hit the Blue Ridge Mountains in Western North Carolina. I called my friend Keith if he is in for some ice-climbing, the conditions are perfect. Sure, we have to go now before it all melts away.

Sunday, Dec 18 was our day. We met around 10:30 in Boone and hit north on the Blue Ridge Parkway. Then we reached the gate closing off the Parkway at Doughton Park. Only 3 other cars were parked at the sunny parking lot. It was warm and the December sunlight turned the ice-covered trees and branches into sparkling diamonds.

The sun warmed up the frosted branches and the air was filled with a concert of cracking sounds of breaking ice. Walking by the gate with our ice climbing gear in the backpacks, turning around the corner into the shade, the warm air was history and a paradise of ice cycles, pillars, and solid frozen walls caught our attention.

A couple of other climbers were already up in the frozen waterfalls. The first group even offered us to use their already set up top rope. That’s the advantage when sleeping in on a perfect day like today.

Our first climb should be an easy one to get wormed up. It took us a few minutes to put on the little bit rusty crampons after they spend a long summer break in the moist garage climate. You should know that the summers are pretty humid in North Carolina. It felt good to put the wrists back into the slings of the ice ax, and it sounds like music when the ice screws were hitting against each other hanging from the harness.

The friendly climbers who offered us to use the rope were setting up another pitch just a couple yards to the left. A vertical step, about 15 feet high, followed by a mellow slope of 45° solid ice cover over rock and grass ending under a vertical and 3 feet diameter pillar. This big one was a nice treat at the end of the climb and the sun was shining a bit through the trees warming up the brittle ice.

Keith and I were blessed today with the advantages of getting out of the house late. We used the already set up rope again for our next climb. After coming down to with the 6-inch solid frozen road surface, we needed a little rest to recover our arms. We watched another group of climbers doing a difficult mixed rock and ice climb to our left side.

A nice overhanging rock crack and big ice cycles hanging over the edge above the overhang was an interesting little boulder problem. First one of the climbers traversed over from the previous climb to set up a top rope. The first guy trying it did an excellent and exciting job mastering the difficult and overhanging hand crack and swung over the edge with ease.

After a nice little break watching and chatting with the group, we got off for a new climb ourselves. About 50 yards down the road a frozen gully draws out attention. Water was still running underneath the ice and it broke through it at the bottom disappearing in a pipe running under the road. Right next to the gully an approximately 30 feet tall vertical wall of crystal clear ice cycles made an excellent combination of climbing up the frozen gully first, traversing over to the right and set up a top rope for the ice-cycle wall.

Keith was leading the easy route up the gully. It was an about 75° slope, followed by a 50 yard bushwhack traversing to the right. Frosted brushes and thick rhododendrons are the little obstacles to reach over to the top of the other side. It wasn’t too bad going through that jungle and the top rope was in place soon after.

Back at the bottom, it was my turn to climb the 90° ice-cycle wall. The ice was clear like glass and brittle like candied sugar. When you placed the ice ax junks of ice were flying around your face and the silence was broken by the noise of falling marbles. It was so much fun to play around in that spot that we climbed up several times until we couldn’t hold onto the shaft of the climbing tools anymore. I definitely had to pay for the times I spend too much on the couch.

We finally called it a day at 3 O’clock. There is a 300 feet tall frozen waterfall below the road. We just looked at it and agreed this one is on our list later on this winter when we are in better shape. Another quick look back into the entire cove of the traversing Blue Ridge Parkway with all the frozen beauty and we turned around.

The walk back to the car was short and the afternoon sun felt good on our bodies when we turned around the corner at the gate. A little snack in the back of the van and hot tea from the thermos was a welcome refuel after our first day out on the ice for the season.