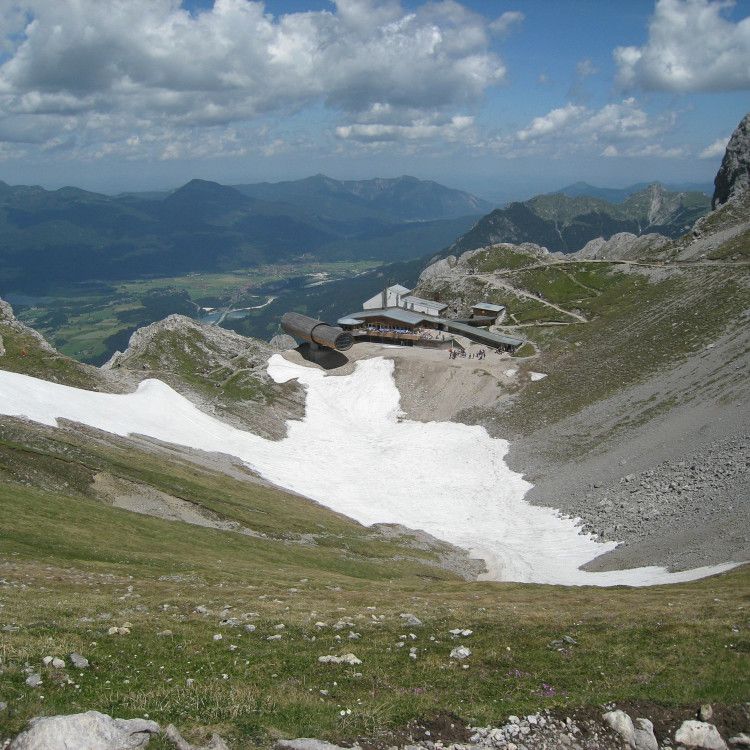 For the 1999/00 ski season, the Dammkar was nominated as Germany’s first and unique Freeride Ski Resort. What is that in particular? The Dammkar Ski area is a 7 km long ski route following a high alpine bowl/ravine on the east side of the Karwendel Range (Karwendelgebirge). A cable car provides easy and quick access. The slopes are not groomed nor patrolled by the Ski patrol. The public access through a tunnel to the slopes is dependent on the avalanche hazard.

The ski area is under constant avalanche control for safety reasons. If avalanche danger is present after a snowstorm the ski area remains closed. A team of avalanche experts will analyze the situation and use explosives to release avalanches. After the situation is back to normal and safe the slope will reopen. 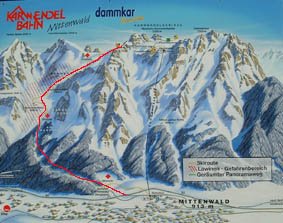 In the 1950s and 60’s long, before the Karwendel Cable Car was built, groups of skiers arrived from the close-by urban areas of Munich and Augsburg. Travel agencies chartered entire trains called the legendary “Karwendel Express” to bring large groups of ski adventures to the little town of Mittenwald.

Come check out my other trips and journals

A never-ending line of skiers was moving through the streets of Mittenwald towards the trailhead at the bottom of the Dammkar. Groups of alpine skiers were skinning up the Dammkar for some exceptional ski-touring. About halfway up at 1650 m elevation a little rustic lodge provided shelter. The lodge also functioned as a restaurant selling food and beverages.

In the year of 1967, the cable car construction was finished and an aluminum gondola was able to lift 36 persons within a 6-minute ride to the top of the Karwendelhaus (2244 m). The climb from there over into the Dammkar was not an easy one and required some alpine experience. In 1974 a 400-meter long tunnel was drilled through solid rock underneath the Karwendel Spitze. The tunnel is designed to provide easy and safe access to the Dammkar.