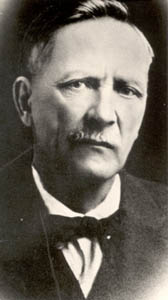 The Norwegian skier Sondre Ouverson Norheim developed a new style of skiing. In 1886 he impressed the skiing community with his new turning technique. At this time Norheim was able to jump on skis about 30.5 m (approx 100 ft) and he organized the first Nordic Downhill competition. The term “Telemark” for his type of turning was given by the residents of Christiana, today’s Oslo. Norheim’s home the little town of Morgedal was located in the Telemark region west of Oslo. In a race at the “Huseby Hill” the athletes from Christiana couldn’t compete against Torjus Hemmestveit, one of Norheim’s students. Another reason for the new name was to differentiate between the two turning techniques. This created an ongoing competition between the Telemark turn and the Christiana turn. In 1884 Norheim immigrated to the United States and taught his Telemark turn in the new world.

Norway and especially the region of Telemark counts as the birthplace of today’s modern skiing. Skis were already known for a long time and used for walking across the snow. It made transportation for farmers and hunters in the northern European countries with long and cold winters possible. Residents of the little town of Morgedal in the Telemark region were gathering regularly on Sundays to enjoy some fun times on their skis together in the surrounding hills.

Some of them entertained with jumps from snow-covered roofs of little farm building. One of the ski acrobats was Sondre. He was improving his ski equipment and his skiing technique to become more efficient and faster on skis. His style of turning is known today as the Telemark Turn. Sondre was an excellent craftsman as well and he was building skis and incorporated new technology into his designs. Sondre was the first who crafted skis with a side cut in order to make them turn easier.

At the turn of the century in the European Alps the “Parallel Technique”, which was taught by Mathias Zdarsky, became more popular over the Telemark turn. The Tele-turn disappeared in the regions of the Alps almost completely until it had a revival in the 1980’s lead by American skiers who rediscovered the Telemark technique in the 1970s.

Telemark Skiing in the Alps is not as widespread as on the North American Continent. One of the biggest differences between both worlds is that in America many of the Backcountry skiers are on Telemark gear compare to Europe where Alpine Touring equipment dominates. In the beginnings of modern Telemark skiing in Europe, it was very challenging to find gear. If someone was looking for bindings or boots, you needed good connections to find ski shops carrying Telmark equipment. When I started Telemarking in 1990 the group of local Telemark skiers in our town counted about 20. Since then the group grew just a little bit to maybe 30 individuals.

In the ’90s the development of modern telemark equipment came to its peak. The first plastic telemark boot was introduced to the market and revolutionized the technique, control about speed and pushed the limit of Big Mountain skiing. The stiffer boots required different bindings to optimize its advantages and to transfer the forces better to the ski. More about TM hardware on the Gear Page.

Telemark Technique – The main feature of the Telemark technique is the free heel. The ski boot is connected to the ski only at the toe. Telemark boots need to be flexible at the bellows to execute the distinctive telemark stance. The proper telemark stance will require to push the outside ski (of the turn) in front of the other and bending the forward leg. The rear leg will drop the knee under the skier’s body weight. The forward ski will lead into the turn and falling followed by the rear ski. After crossing the fall line the skier will alter the ski position and anticipate the following turn. 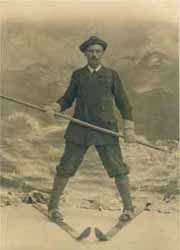 Long winter month and Nansen’s Book (1891) convinced Mathias Zdarsky to obtain a pair of skis from Norway. The skis were equipped with for its time common Nordic bindings without any lateral stability. He found out immediately that this type of equipment is designed for long walks across flat snowfields or rolling hills.

For the use in steep alpine areas, Zdarsky’s home, the binding did not provide the necessary stability to utilize the skis for sliding downhill. After countless trials, he came up with a design of a metal frame binding to optimize the control from boot to ski. The binding was named after him and the town he was from, Zdarsky or Lilienfelder Binding. This type of binding still had a free heel like the original from the Telemark, so if a skier fell down it eliminated some serious injuries known later from the invention of the Kandahar binding types in 1930 with locked down heels.

Today we see the Austrian town of Lilienfeld as the birthplace of the new Alpine Skiing Technique. It’s the most popular form in the public, a race competition through gates was one of Mathias Zdarsky’s ideas. He organized the first type of giant slalom in March 19, 1905.

The roll Mathias Zdarsky had as an entrepreneur for modern alpine skiing technique became even more obvious when skiers considered the employment of the new Norwegian-Semen Double Pole technique versus the traditional single-pole the Lurk.

Zdarsky’s invention of the rigid and torsional stiffer binding, the Lilienfelder Binding, experienced even more development later in his life when skier experimented with locked down heels and custom made leather ski boots versus common mountaineering boots used for skiing.

Skiing became very popular in the regions of the Alps. Different styles of skiing evolved over times and different technical needs became necessary for binding. In 1930 a binding type called Kandahar Binding was one of the most innovative inventions. This binding was completely manufactured from steel and had a cable and hooks to lock down the heel if necessary. With a lever in front of the toe piece, steel cables, and cable hooks underneath the boot the skier was able to strap down the heel to the ski and gain more control over the ski. For example for Nordic ski jumping the binding was used with limited travel of the heel. At the same time, the binding was usable for the Telemark turn as well as for climbing up hills with skins and for the popular Alpine Skiing Technique employing parallel turns with locked down heels.

Kandahar bindings had no safety features and in the locked-down mode, they could cause serious injuries in the ankle and knee. In 1952 ski binding designer Hannes Marker from the town of Garmisch-Partenkirchen, Germany presented a new releasable toe piece to replace the old toe bracket. His type of binding (duplex & simplex) was very simple compared to the modern safety bindings of today, but it helped tremendously to reduce injuries. The first types of releasable bindings could handle only lateral release caused by rotation. The frontal release feature (Marker 1956) was the next step towards today’s safety bindings and safety standards. The Marker safety binding was designed only for the use of downhill skiing and had no climbing feature for the ski mountaineer. 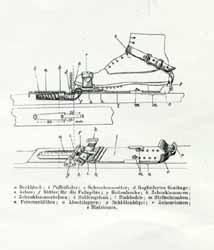 The first safety bindings for backcountry skiers appeared around 1975. Isser and Vinersa bindings are one of the first safety bindings with unlimited (90 degrees) heel travel. Both binding makers are incorporating the simple but very effective and reliable Marker Rotamat heel pice in their binding designs. Marker developed a modified Rotamat unit with just 3 inches of wheel travel for his own model line for the occasional backcountry skier with high safety in mind.

Silvretta with its 300 models from the 1970s remains still as one of the tops AT binding makers on the market and the design of the latest model from 2002 (550) is very similar to it’s an older brother from the late ’70s. The Swiss AT binding maker Fritschi revolutionized the AT binding market in the 1990s with its Diamir and Freeride models. The bindings are known for their durability, safety features and even the wide range of use for inbound resort skiing and backcountry skiing with no limits.

The term Randoné is coming from the French language and it is just their word for Alpine Touring. French mountaineers demanded a special lightweight ski in the ’80s and one of the major ski manufacturers in Austria build a super lightweight model with a hollow air chamber. The ski company named it’s featherweight “RANDONÉ” and probably created a synonym for ski touring.

I’ve seen some other AT bindings but they are very little companies and only locally available. Some of the above-mentioned companies are not in business anymore or no longer manufacture AT bindings.