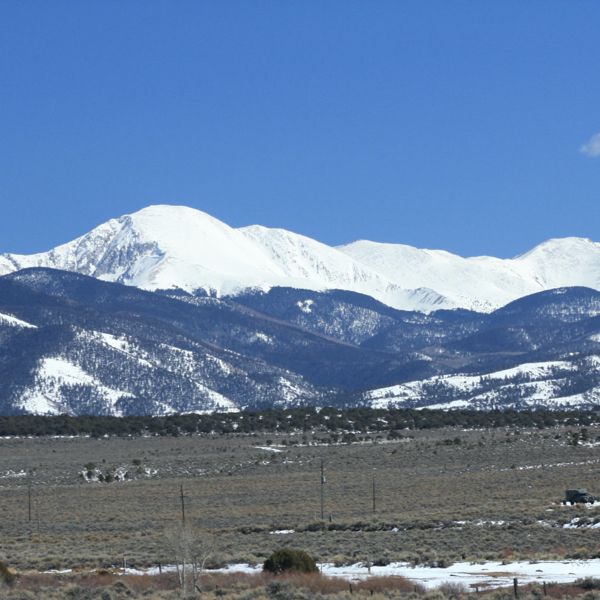 Once in awhile, it’s a good idea to leave the office and go on a job-site visit. We had one site in Walsenburg, S-Colorado, and I volunteered to wrap up that project, in return for a free plane ticket to Denver and the Rocky Mountains. I was familiar with Walsenburg and the area from a previous visit in March and the work site was just at the bottom of East Spanish Peak.

In early May that region got plenty of new snow, our client told me about 6′ overnight at the site. So it should be some left for some Backcountry skiing at the Spanish Peaks (13626 ft, 4153 m). When I arrived on May 23rd the chutes facing east are still holding plenty of the white magic stuff we are so passionate about. The beautiful view kept me excited the entire week working beneath them. Finally, Friday afternoon arrived and I got a ride to Colorado Springs and picked up a rental car.

Joyful driving back south, passing through La Vieta and Cuchara to the Spanish Peak Trailhead at Cordova Pass (11743 ft) where I planned to stay for the night. I arrived at midnight and prepared the little rental car for a shelter protecting me from the gusty west winds hauling all night. After a surprisingly comfy night in my rental shelter, I woke up at 6:00 AM with the first worming sunlight. The first task for that morning was to check out the slope and snowpack at the west side of the mountain.

It was not like I expected. The western exposed slope was pretty much not worth to bring skis. The second task was to call Ttipster Hans to set up a time and a place to meet on Sunday for some skiing further North.

Driving back the gravel road to Cucharas Pass (9941 ft) I found much more appealing ski conditions on the east-facing slopes of Trinchera Peak (13517 ft, 4120 m). The snowpack over on the other side of the valley reached down to approx 10000 ft.
Just below Cuchara Pass, a forest road is heading up to Bear Lake and Blue Lake Campground forking off toward the big snowfield which attracted me earlier this morning. The road was splitting and a sign indicated the way to Trinchera Peak TH. After about 200 yards the road was blocked with a huge snowbank and solid coverage beyond that. This was a clear sign for me for a good start for some good skiing.

I got my pack ready, skins onto the skis and following the snow-covered trail winding through the tall fir trees towards the bowl below Trinchera Peak. The snow was very soft and covered with plenty of fir cones and needles, probably blown down from the strong winds last night. After maybe 1 hour I reached the tree line and the big wide open bowl was in front of me. But with leaving the trees below the snow conditions changed immediately to some not very promising spring skiing.

The snow was completely frozen on top and the surface was textured with an endless pattern of runnels following exactly the falline. The most concerning part were, the runnels were about 4″-6″ in width and about a foot deep. Just perfectly in size to accommodate a ski turning into the falline, locking it in and no chance of release.

I was gaining elevation and hoping that further up the snow situation will change. The only thing that changed was the speed of the wind. It picked up more and started blowing hard again. I had to fight some strong gusts which are trying to push me out of balance. The only living creatures up here in the unfriendly weather situation was a little group of Bighorn Sheep crossing my way.

I sat down for a couple of minutes in the saddle just below the peak where the snow ended. I needed some snacks and a drink to refuel and some oxygen as well. While holding against the permanent strong winds, all of a sudden the weather changed from blue sunny skies with wonderful white cumulus to a huge dark gray cloud building up extremely fast around the peak, I was going to climb next. The air had a fresh smell of moisture to it as well.

The wind picked up even more speed and the peak about 300 ft. above me disappeared in a frightening dark gray cloud. This was an obvious sign for me to skip the maybe 15-minute climb to the peak across the scree. It seemed to me that I am facing a thunderstorm soon. All of a sudden I got in a rush to peel the skins off my skis, back into the bindings and as quick as possible down the slopes.

It was everything else than fun to ski the hard frozen runnels. I was only able to cross them in a certain angle and use the full width of the slope, do a jumped turn and cross back over to the other side of the snowfield. The views from up here were breathtaking. The Spanish Peaks are the last Landmark standing at the edge of the eastern slope of the Rockies bordering to the Prairies in the eastern part of Colorado. Almost back at the trees with this kind of frustrating skiing some big icy pellets, almost hail got pushed down by the continuing high wind gusts and I noticed the first sound of thunder. I felt much better with the protection of the trees.

Some trees gave scary squeaking noises as they got bent by the enormous power of nature. I approached my car fairly soon, threw everything unorganized into the trunk and headed down as fast as I could toward the little village of Couchara. On my way down on the forest road, a massive thunderstorm started rolling and the echo from the surrounding peaks made it even more dramatic.

Reaching the paved HWY 12 a sort of a blizzard started. I felt safe in my little car and watched the nature playing its powerful game around Trinchera peak and the Spanish peaks rising straight up in front of me. Turning right into the nice little town of Cuchara was the end of this eventful spring skiing day in the southern part of the Sangre de Christo mountains. The friendly owner of the general store explained to me that this was the first precipitation for the month of May, which had only 2 days left.

Part I: Road trip from Cuchara to Independence Pass

Leaving Cuchara around 4:00 PM my next destination was the Great Sand Dunes National Park on the west slopes of the Mt. Blanca Massive (14345 ft, 4372 m). Some impressive sandstorms were rolling over the flat San Luis Valley just north of Alamosa. The Sangre de Christo Mountain Range is probably the natural barrier pushing the winds up for almost 7000′ and dumping the sand right where the Dunes are.

A short stop in Salida, great dinner, getting gas and continuing on HWY 24 north to the intersection with HWY 82 towards Independence Pass. Tomorrow at 9:00 AM I will meet here with Hans from Denver. I found a nice campsite along Clear Creek, sipped 2 beers and snuggled into my sleeping bag in the ‘rental shelter’ at about 11:00 PM.