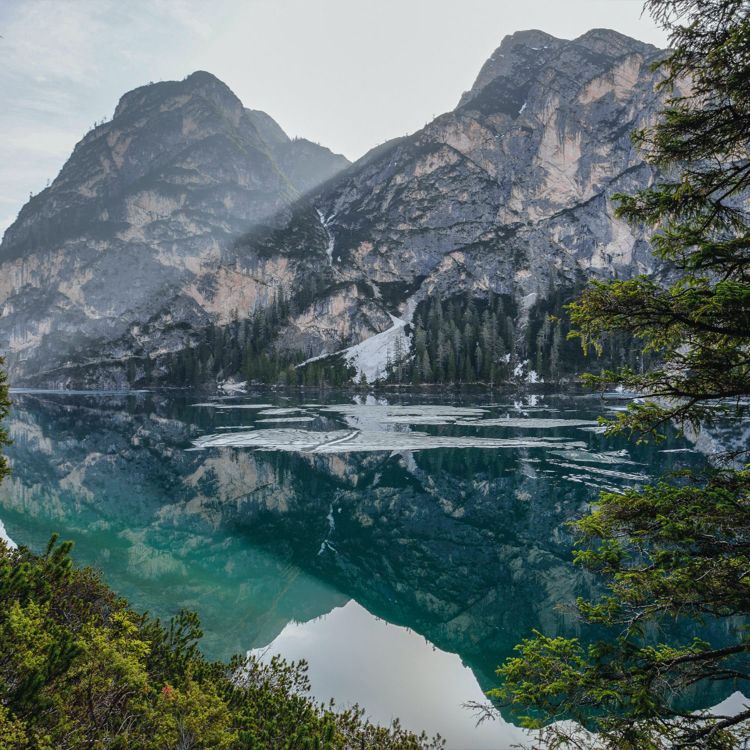 I needed a couple of days off and was still not sure where to go. The main consideration to go somewhere close to the place I live made my dentist when he showed me his bill. I traded my budged for a ski trip to Canada into some necessary dental work. Friends told me some about Snowshoe Mountain and Timberline Resort up north in West Virginia and that there is a big concentration of Teleskiers at the later one. It just happened that the mailman dropped the latest issue of Couloir-Winter 2004 into my mailbox just the other day. Reading through the magazine I got hung up with the article about Whitegrass, Wild West Virginia. Read this one over and over, checked my road map to find that place but no luck, and read about the Telemark legend Dickie Hall and Chip Chase.

This might be an interesting destination for my cut down travel budget. I dropped Chip a brief e-mail message asking for snow conditions and told my wife: “honey we are going to Whitegrass for a few days”. Chip replied immediately with the following message: “megatons of snow this AM and no rock skis needed-chip”…wow that’s it – perfecto.

See also my Ice Climbing Along the Blue Ridge Parkway

A couple of days later we got our gear in the van and started rolling on I 81 north. Beautiful sunshine and the outside temperature was rising to 65 F when we turned into Canaan Valley. Barely any snow left, just in some shady N-oriented spots where the sun had no chance to melt it down. Some miles north just by the Canaan Valley State Park a little sign pointed the way to the Whitegrass Ski Touring Center. Coming closer to the hills we could find some snow on the north faced slopes on higher elevations, but still, the bottom of the Valley was kind of grayish-brown with lots of little ponds holding water in the flat pastures. Reaching the lodge, turning off the engine and getting out of the van we found us in ankle-deep mud.

We waded across the muddy parking lot to the Whitegrass Lodge’s main entrance. A little stream running out from the inside of the foyer welcomed us. Where are those megatons of snow, I asked Erika and she started laughing about us and our situation and she replied: “you were the one who wanted to come up here”.

In the Lodge, we met only one Guy sitting at a table over lots of paperwork. “This must be Chip in his office,” I thought and offered him my hand with a friendly: “Hello, I am Stefan, you must be Chip” he replied “yeah man, good to see you, and welcome” With a skeptic look through the window, he was sitting in front, I asked him: “do you have some snow left?” and he replied with a big smile: “yeah baby, tons of snow this year, unbelievable. You wanna go ski, I leave in a couple of minutes…get your gear ready”.

5 minutes later, it was about 4:15 pm, we left the lodge and climbed up the slope. First through some huge puddles of crystal clear water running downhill in hundreds of streams, in between some kind of snow and ice over to the old Weiss Knob Slope. The old downhill ski area was still covered with a solid base of snow. But today’s weather conditions turned the snow into a mushy mass with no bottom. Chip mentioned that last night it didn’t freeze for the first time this season so we might have to deal with some rotten snow.

He is a great tour guide I can imagine from his drive to explain every little corner in his territory. While climbing up he cleaned the woods by taking little twigs and rocks out of the trail between the trees, telling that tree skiing here is the best you can find. Used to the woods further south where I live right now, with lots of undergrowth and Rhododendron, I absolutely agreed. Passing the little shelter at the end of the old downhill slope, I think it was Round Top, we skinned up through some really steep and heavily wooded terrain to the top of Bald Knob (4308 ft).

From up here, we had a gorgeous 360 panoramic view. We took our skis off and Chip continued with his detailed love of explaining all his favorite spots and runs up here. From the Pipeline, a fairly steep, about 40 feet wide straight in the fall-line slope leading towards the Canaan Ski area, to some wide-open meadows ideal for long XC tours to some awesome tree skiing back at Stone camp Mountain. 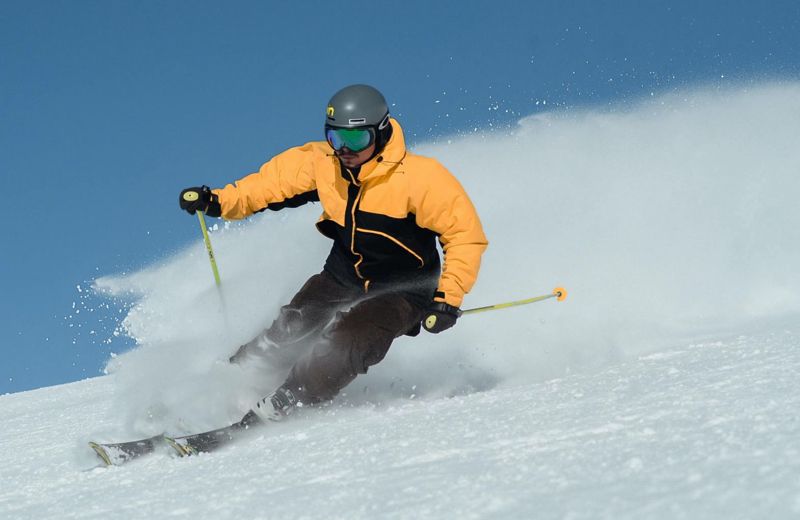 Now it was the time to ski down. Gliding down on an old trail you had to turn very carefully with a sensitive feel for load distribution on your skis. If you put to much weight on one of the skis and if you used the edge too hard you were diving into the rotten corn like into water. But Chip was right, up here at about 1000 feet above the lodge there was still plenty of snow providing a good solid base for some fun skiing. Just the temperature was not low enough to create some spring corn. Crossing some snowless grassy patches we reached the top of the old Weiss Knob ski slope again. Both of us were excited about some fun tele turns.

Chip and I photographed each other ripping down the slush. Check out Chip’s short video clip skiing the Weiss Knob slope. Easily we managed the last remaining 300 feet through some narrow patches of vanishing snow to get back right to the lodge’s front door on skis. Chip: “Yeah baby, putting on the skis and return on the right to the lodge, that’s how it should be”…“the snow’s there…it’s gotta be used” (Chip Chase)

We celebrated our great afternoon “Slush Trip” with a pitcher of “Dark”, salsa, chips and some *Shine as well as some “Grappa” back at the lodge.
Regardless of the hot weather conditions or other circumstances, it was worth the trip to that incredible place. The lodge is a unique crossing between the dining room and ski shop as well as a pub. An unforgettable place you know you have to come back for more fun.