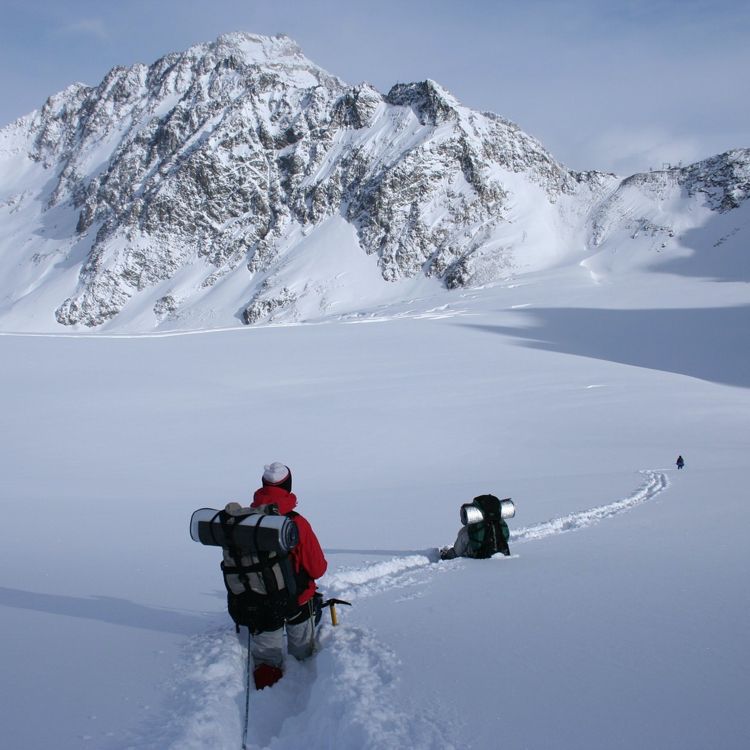 Low pressure and severe thunderstorms were dominating on Tuesday 7-19-05 on the entire northern slopes of the Alps. The temperatures were dropping significant and snow was falling above 2800m / 9200 ft. The weather forecast for Wednesday: OCCASIONAL MORNING SHOWERS AT THE NORTHERN FRONT RANGES, CLOUDLESS SKIES IN THE CENTRAL MOUNTAIN RANGES, COOLER TEMPERATURES.

A short call at the “Pitztaler Gletscherbahnen” confirmed the forecast for tomorrow. I got the skis and boots in the car and prepared for an early morning start.

Left the house Wednesday at around 6 AM, pretty late for that drive, and had an uneventful ride of 2 HRS to the base of the Pitztaler Gletscherbahn. I shared the 8:30 car of the tram with only two other guys. One was a hiker and the other a mountaineer with the same goal for the day – climbing the Wildspitze, Tyrol’s tallest and Austria’s 2nd highest Peak. After a 15 minute ride and stepping outside the tunnel at the station I was surprised about the scenery up here and the shape of the glacier.

The last time I was up here, about 14 years ago, it was a busy summer skiing area. The ski resort is now closed for summer skiing, the glaciers & snowfields are much further away from the station and the glacier ice is covered with huge tarps so they do not vanish completely.

14 years ago when I climbed the N-face of the Wildspitze with a friend, we were able to use the two ski lifts to reach the Mittelbergjoch (3166m). Today I have to descent at first 450 ft and continue with a 1500 ft ascent in the ski lift line until I can cross over to the Taschachferner at the Mittelbergjoch. Another 300 ft vertical descent got me on the maybe not so eternal ice of the huge Taschachferner where I put skis with skins on my feet for the long walk to the top of the Wildspitze.

See my post about the “Ski Touring Around the Ridgway Hut”

The first hour of skinning across the Taschachferner is very flat. The line traverses beneath huge crevasses and icefalls/seracs below the Wildspitze north face. The 55º ice wall of the Widspitze is very dominant and visible the entire route. After a steeper section, the route turns around almost 180º and continues above the icefalls and leads towards the east in direction of the Wildspitze peaks. Now I could see both peaks. The N-Peak 10 years ago the taller one is an ice cap on top of solid granite.

The past dry and hot summers melted down the ice cap and it shrunk for about 10 feet. Today the S-Peak a granite pyramid marks the highest point of Tyrol and it’s tip bears a large metal cross. After a steeper step from the flatter lower glacier to the bottom of the 45º ice wall between both peaks, I reached the ski depot which is about 300 ft below the cross. All of a sudden the mellow breeze turned into a cold wind and I preferred to pull over a jacket and gloves. A fellow mountaineer, just coming down from the peak, told me that it is absolute calm up there. I couldn’t believe him at the moment. After a nice climb over the S-E ridge, I reached the 3770m / 12,369 ft tall peak, and the guy was right, it was absolutely calm – no wind at all.

Stunning views from the peak in all directions and a quick snack made my break up here more than pleasant. To the east, north and west the glaciers “Grosser Vernagt Ferner” “Taschach Ferner” “Mittelberg Ferner”, covered in bright white from the last night snowfalls. To the south, the deep gorge of the “Rofental” which is the far end of the Ötztal, cuts deep in between the mountain ranges. 1700m / 5577 ft lower the melting waters of several glaciers are roaring in the Rofen Ache River and further into the Ötztal and River Inn.

I didn’t like to risk missing the last tram back to my car at 4:30 PM. I still had to climb two steps with a total of 750 ft vertical feet to get back to the Pitztaler Gletscher Bahn. On my way up with skis and skins, I earned some weird comments and strange views from all the “summer-mountain-glacier-tourists”. But now when I passed them on my skis down the boring glacier walk, I could see sometimes how jealous they got.

The snow was extraordinary for this time of the year. A touch of powder for the first 600 vertical feet and after that best quality summer corn. From the Mittelbergjoch down the old summer ski slope, I found the legendary “buttahhh” and it felt so good that I skied slower than usual to enjoy that stuff longer.

Towards the end of the glacier, I got these strange feelings again skiing in between tarped snow and ice. From the tongue of the glacier, it was another 45-minute hike with 300 ft vertical gain to the tram station and the restaurant where a cold beer was already waiting for me. After the super exhausting last climb, I sunk down in a lawn chair on the large deck and enjoyed the half-liter “Schlossgold” and the warm summer sun before I returned to my car with the Pitztal Express.

Back at the parking lot, I felt like a 5 legged dog while packing the ski gear into the trunk of my car under the hot burning summer sun. Tourists and hikers in shorts were strangely staring at me and my winter gear which was cluttered all over the place while I was changing ski boots with flip-flops, fleece shirt with a t-shirt and climbing pants with shorts.