Special notes: A ride with the Wankbahn gondola saves you about 1.5 hrs of skinning to the Esterberg Alm 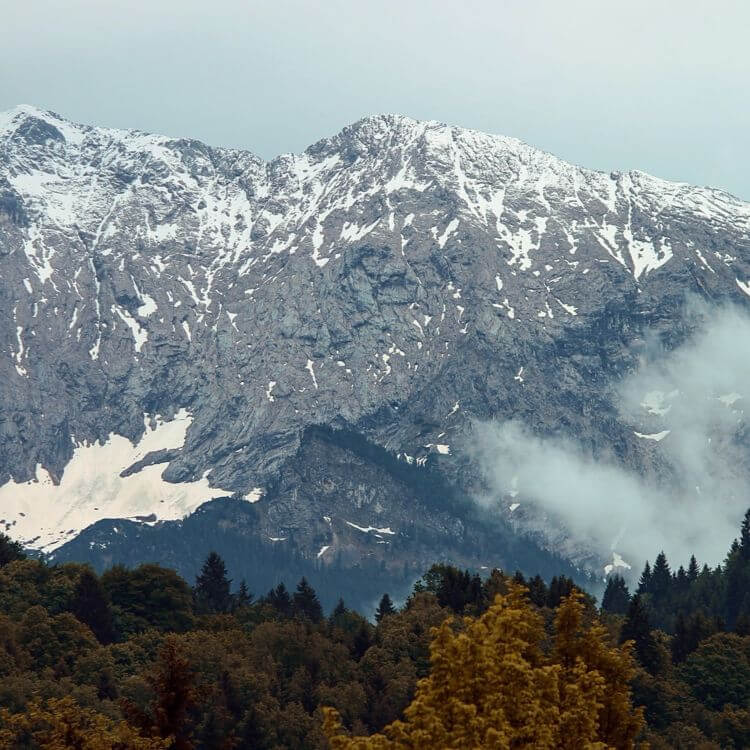 For the locals of Garmisch-Partenkirchen, the Fricken is a popular Backcountry tour right in their backyard. The easy access in the lower elevations on a groomed forest road to the Esterberg Alm gives it a special touch. The rustic restaurant/lodge at halfway is a perfect spot for a break to refuel with energy on your way up to the mountain and after returning from the peak a perfect place to re-hydrate.

It has been a while since my whole family was back together in Bavaria, Germany for the Christmas holidays. We flew to Munich on December 15 and drove from there 60 miles south to Garmisch-Partenkirchen. Everybody was excited about the 4-week vacation back home. I loaded all my BC skiing gear into the airplane to have some fun time with my old skiing friends over the holidays.

On December 25 usually, my mother in law serves the traditional “Christmas Goose” but for this special occasion, guests from overseas, she was going for a turkey. (YUMMMM). To become really hungry I grabbed my tele skis and skinned up the Hörnle which is the “Haus-mountain” just in our backyard.

The turkey feast was excellent and the rest of the day was spent most of the couch north-face feeling stuffed and lazy. In the evening the phone was ringing and my old buddy Reiner gave me a call. What a surprise, haven’t heard from him for a while. He asked me if I skied down the Hörnle-slope at about 11:30 am, and if I was the guy with a faded pink ski bib from the early nineties. I replied, “yes, but why?” – “Oh we skinned up this morning with a couple of friends and there was that tele-skier coming down with those old fashioned pants, and the only person I know wearing pink ski pants that is YOU – but I thought you are in America” – “Or maybe not? maybe you are back?” – YES, that was a big surprise for both of us and “Let’s do a BC ski tour tomorrow”.

The next morning at 9:00 am we met at the parking lot of the new Wank-Bahn. Some of my old friends were already there. Antje and Bernie, Reiner, Christian and Sepp were preparing their skis. More head turnings this morning as well because the rest of the group didn’t expect me either. Who is that guy in the rental car? Must be a tourist in the big city. But after some cheers, hellos and small talks we headed toward the Esterberg Alm. This is a place up in a high-mountain valley where local farmers bring their cattle for the summer season. The farmhouse/ranch also functions as a restaurant for hikers, skiers and other kinds of tourists.

The climb up on the groomed forest road was gorgeous. The last storm dumped a foot of snow a couple of days ago and covered the fir trees with sparkling powder and the branches were bending down from the heavy snow load. The blue sky and crisp temperatures contributed to an enjoyable ascent. Finally at the highest point of the forest road, in a saddle, it was just a matter of good gliding abilities of your skins to slide down another mile to get to the first rest stop, the Esterberg Alm. Here we joined up again with Sepp who run up the mountain like an X-country skier. A little snack, some tea from the thermos and a big piece of chocolate made up for the second breakfast. 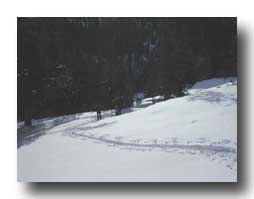 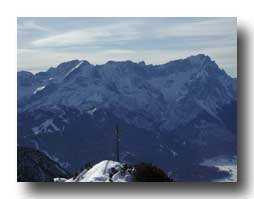 We continued skinning into the Finzbachtal. After a mile and a half, we needed to turn left to reach the crest leading to the peak itself. No one of us knew exactly when to turn, so we decided to do it right here on the spot and we started cutting a new track in the untouched snow. After a while of gaining some altitude in the woods, we spotted on the other side of the ravine the original tracks winding up the mountain. Ohhh no! – we came to an agreement that we turned off too early. Never mind, we crossed the little stream, avoiding to get wet climbing skins, over to the other side and continued on that “highway” uphill. Sepp and Reiner were in great shape that day and stomped up the hill like crazy and disappeared in the trees after a while.

Christian, Antje, Berni and I walked with a comfortable pace so we did not run out of breath and kept our pulse in a normal frequency. Further up the ravine, maybe 600 feet below the peak, the crest was overgrown with “Latschen”. That’s some nasty pine scrub almost impossible to overcome. Usually, if there is enough snow they are well covered so you can find a way through them. Looking out for Reiner and Sepp, Bernie and we weren’t quite sure if there is any reason for us to get into the same torture like we had seen from our both friends as they battled through the bushes just a few minutes ago. Christian already went ahead and followed their tracks.

Antje made up the right decision; she didn’t want to mess with that part, sat down on her skis, got her sandwiches out of the pack and enjoyed the day and the great view. Berni, Christian and we had to pay a lot of sweat for the last few remaining feet to the peak, but we got rewarded with one of the most beautiful panoramas you can find in this area.

From up here, you had a gorgeous 360-degree view into the Alps and down in the valley of Garmisch-Partenkirchen, Farchant and Oberau (the Loisachtal). We were facing the Wetterstein Gebirge with the Zugspitze, with 2964 meters (9725 ft) Germany’s highest mountain and further east the impressive Karwendel Gebirge.

After a long rest up here, we headed down to Antje’s outlook. She was still enjoying the sunshine. The slope right underneath the peak needed high attention and alert. The sun was shining all day on the snow and we had to count on avalanches. So we decided to hike back a little on the ridge before we skied back down close to the pine scrubs and turned over to the crest we skinned up. In our ascent I spotted a nice line through the bowl leading into the ravine we crossed on our way up.

Yeah, there was still deep powder in, north facing with no sunshine so far and the best thing, no tracks either. I had an excellent excuse to break in the virgin snow. Everybody liked my idea to ski down first, get out the camera and take some nice powder shots. We all were hooting and hollering while carving some nice speed turns into the pow. We found perfect conditions all the way down into the main valley (Finzbachtal).

After that treat, the hard work started again, kicking and gliding was the motto for the next half an hour to get back to the Esterberg Alm. Gliding worked very well but in the wrong direction. When you tried kicking yourself forward the ski slid back. In order to glide forward, we employed a technique preferred in X-country skiing, pushing with poles but frustrating and hard work as well. Soaking wet from the physical work we celebrated our nice tour in the Esterberg Alm with some thirst quenchers called Hefeweizen and the special of the day “Kaiserschmarrn”. If you wanna know what that is, follow this wiki link to find out more. It’s something made from flour, eggs, and sugar and tastes YUMMY.